Benchmarking pre-production and production OpenStack clouds is not a trivial task. From the one side it’s important to reach the OpenStack cloud’s limits, from the other side the cloud shouldn’t be damaged. Rally aims to make this task as simple as possible. Since the very beginning Rally was able to generate enough load for any OpenStack cloud. Generating to big load was the major issue for production clouds, because Rally didn’t know how to stop the load until it was to late. Finally I am happy to say that we solved this issue. 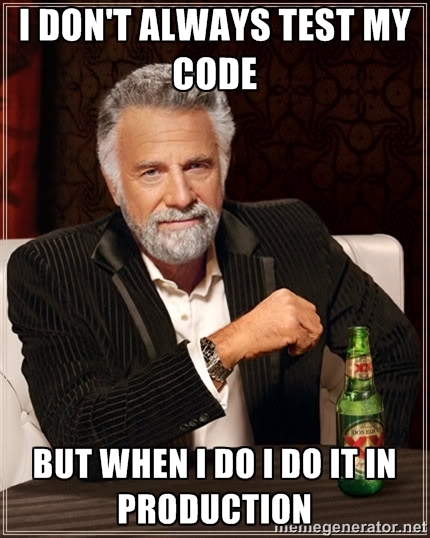 With the new feature “stop on SLA failure” things are much better.

This feature can be easily tested in real life by running one of the most important and plain benchmark scenario called “KeystoneBasic.authenticate”. This scenario just tries to authenticate from users that were pre-created by Rally. Rally input task (auth.yaml):

In human readable form this input task means: Create 5 tenants with 10 users in each, after that try to authenticate to Keystone 6000 times performing 50 authentications per second (running new authentication request every 20ms). Each time we are performing authentication from one of the Rally pre-created user. This task passes only if max average duration of authentication takes less than 5 seconds.

Note that this test is quite dangerous because it can DDoS Keystone. We are running more and more simultaneously authentication requests and things may go wrong if something is not set properly (like on my DevStack deployment in Small VM on my laptop).

On the table with results there are 2 interesting things:

To understand better what has happened let’s generate HTML report: 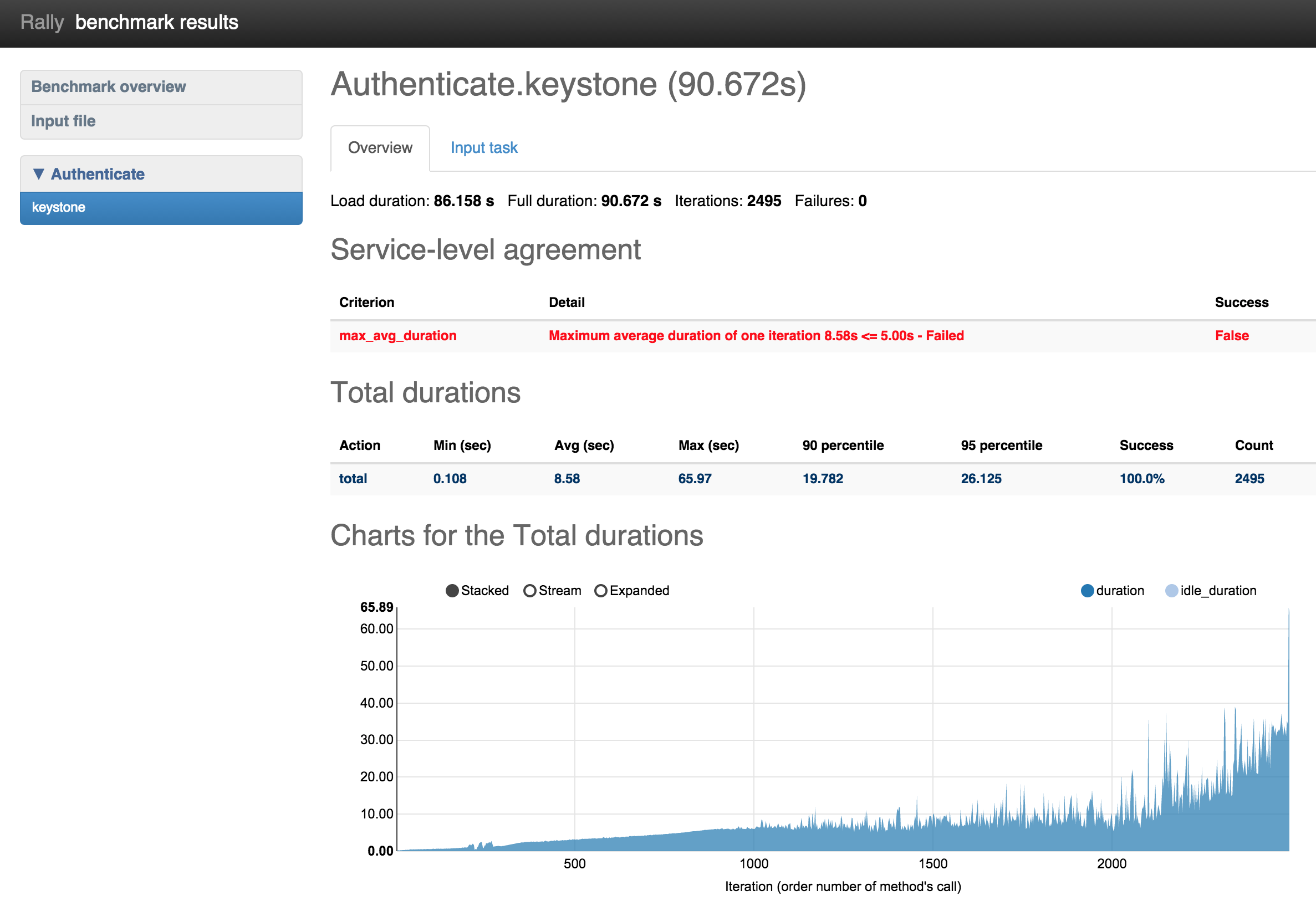 On the chart with durations we can observe that the duration of authentication request reaches 65 seconds at the end of the load generation. Rally stopped load at the very last moment just before the mad things happened. The reason why it runs so many attempts to authenticate is because of not enough good success criteria. We had to run a lot of iterations to make average duration bigger than 5 seconds. Let’s chose better success criteria for this task and run it one more time. 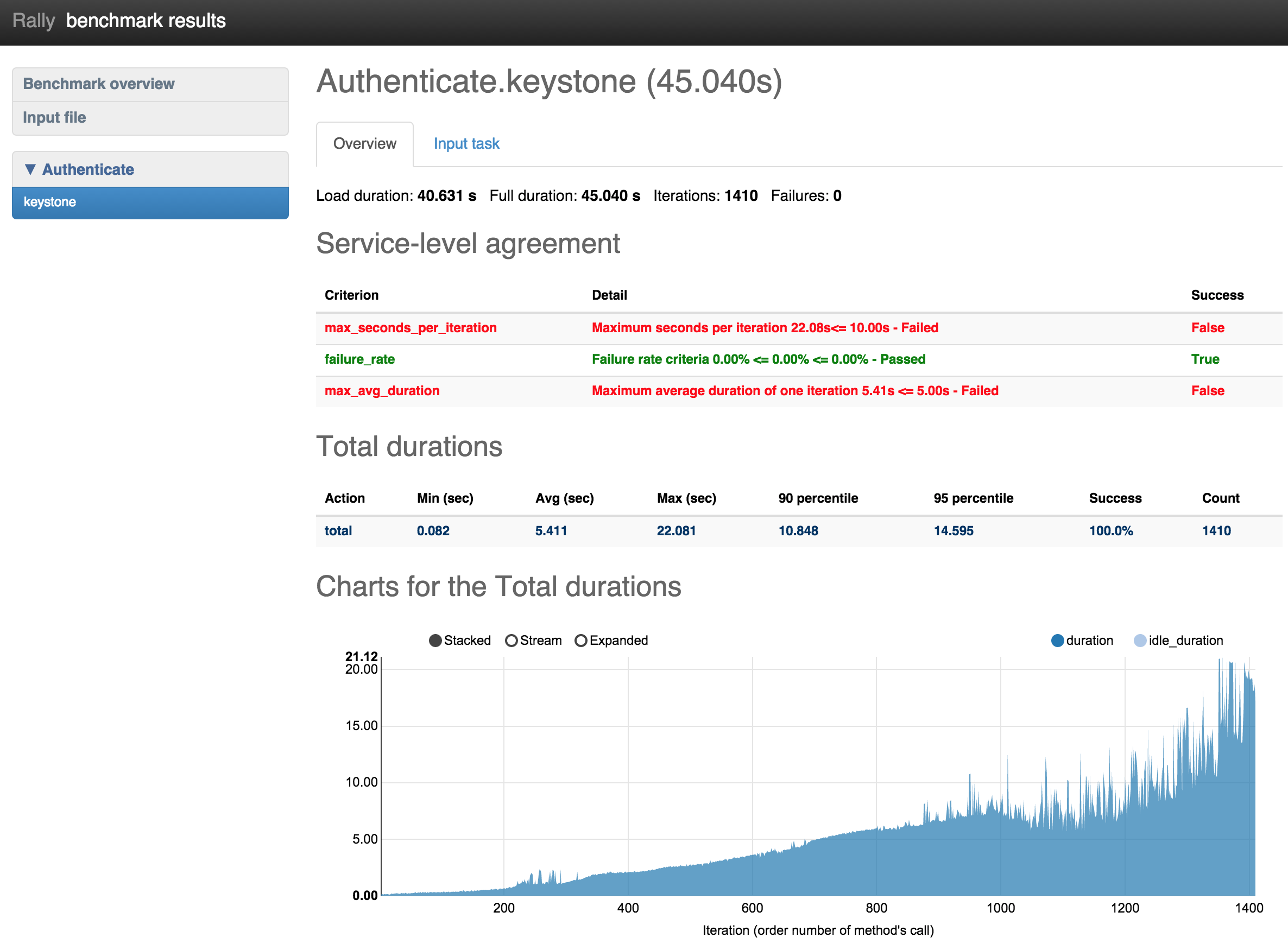 This time load stopped after 1410 iterations versus 2495 which is much better. The interesting thing on this chart is that first occurence of “> 10 second” authentication happened on 950 iteration. The reasonable question: “Why Rally run 500 more authentication requests then?”. This appears from math: During the execution of bad authentication (10 seconds) Rally performed about 50 request/sec * 10 sec = 500 new requests as a result we run 1400 iterations instead of 950.

Rally tries to cover all DevOps and QA use cases and be very simple tool for easy and safe OpenStack testing. “Stop on SLA failure” is crucial and huge step forward that allows to use Rally for testing pre-production and production OpenStack clouds under load.

P.S. Don’t forget to run rally tasks with –abort-on-sla-failure argument 😉
P.P.S Kudos to Mike Dubov and everybody who was involved in development of this feature!